The Regnum Online World Map measures about 6km in each direction, and contains a central landmass surrounded by ocean. The landmass is split into the 3 realms, with the cold realm of Alsius occupying the northwest, the desert realm Ignis in the northeast, and the forest realm Syrtis in the south. Each realm contains 3 regions: the Initiation Zone, the Inner Realm and the War Zone. 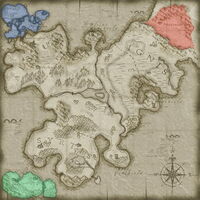 The Initiation Zone, also known as the beginners area, is where new players are brought to upon character creation. These areas are entirely safe from enemy realms, and simply teach new players the basics of the game while they level their characters to level 10. The Initiation Zones all have 2 villages, and they are separated from the Inner Realm by some sort of portal with an NPC teleporter at each side. 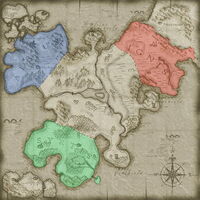 The Inner Realm is the main "safe zone" of each realm. Most of the game's PvE content centers in this area, preparing players before they enter the War Zone. Each realm has built a great wall that separates the War Zone from the Inner Realm. This wall normally keeps players safe from enemies, though through invasions, enemy players can sometimes break down the gates of each wall and raid the Inner Realm. In such cases, it may be best for lower level players to retreat into the heavily-guarded towns and cities. 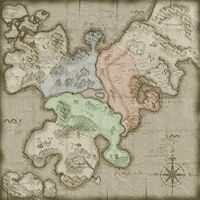 The central area of the Regnum world is the War Zone. This is where the game's Realm versus Realm mechanic takes place. Terrain is not controlled by any realm completely, so players of all realms battle freely in this open zone. The territory is divided by three rivers, and connected with six bridges. Each realm has but a single altar and market here, as well as two forts and one castle, which serve as fortifications protecting the mainland.

Retrieved from "https://regnum.fandom.com/wiki/World_Map?oldid=44156"
Community content is available under CC-BY-SA unless otherwise noted.