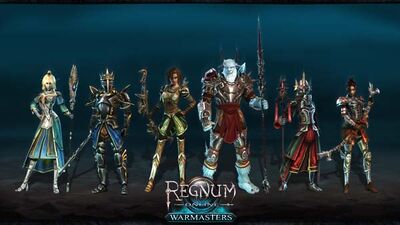 Warmasters are powerful players, capable of using skills that can turn the tide of any battle. All classes can become a Warmaster by equipping a full set of Warmaster Armor. Warmaster armor can be bought from Warmaster Trainers in the player's capital city. The total cost for a full set of armor is 120,000 Master Coins. Master Coins are a form of currency earned by completing quests for the Warmaster trainers.

There are 5 quests that a player can complete to be rewarded with Master Coins. Two of the quests require killing 20 unique enemies from each enemy realm (The Path to Warmaster) and another two quests (The path of the Warmaster) require only the deaths of 10 unique enemy players. Finally, a third quest allows the player to convert gold into Master Coins (An Expensive War). All of these quests are repeatable. The Path to Warmaster and An Expensive War reset daily at 3:00 GMT.

Warmasters also have a special power with regard to ingame chat. Usually, for the Ra Server, within the Inner Realm of your home realm, which is everywhere outside of the Warzone and enemies' Inner Realms, there is ingame chat extending right across your own Inner Realm, covering all members of your realm in your Inner Realm. There is also a trade channel, and a local nearby chat channel. Once in the Warzone in Ra, there is no longer any chat available extending across all members of your realm. There is only local nearby chat. However, Warmasters gain access to an exclusive chat channel covering all Warmasters both in the Inner Realm, in the Warzone and anywhere else in the game.

The developers tend to finetune the availability of chat in each server according to the characteristics of player population and their behaviour. For example, in a prior server called Haven, there was once realm-wide chat for all members of your realm, no matter where they were. However, over time, as the player population became larger and more stable, such realm-wide chat may be removed to prevent the occurrence of too much spam chat during a war.

There are 4 types of quests which reward the player with

Additionally, Warmaster Coins can be obtained through the dragon wish "Closer to Warmasters", granting 7,500 coins.

Warmasters gain access to an additional discipline of skills. These skills primarily enhance an army's defenses.

Warmaster Jewelry can be bought from the vendors in each realms castle, as long as your realm has captured it. Every castle has a different set of Jewelry.

Community content is available under CC-BY-SA unless otherwise noted.
Advertisement