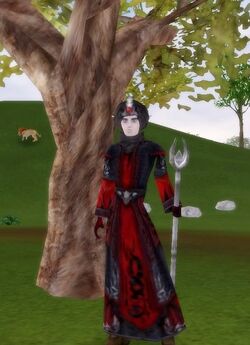 Warlocks are subclass of the mage and are one of the most powerful damage dealers in the realms of Regnum. In addition to being capable area nuker, the warlock is also able to cast effective crowd control spells, cause damage over time, and disrupt the enemy using many powerful curses. Together, these skills make the warlock a dangerous, and often targeted, opponent.

Like all mages, warlocks lack defense, evasion, and health, making them an easy target in battle. Unlike the conjurer, the warlock does not have access to a wide range of damage reduction abilities to overcome these weaknesses. Instead, a warlock can drain health and mana from his opponents with powers from the necromancy discipline, turning damage to his opponent into healing for himself.

As well as the mage disciplines of Mental, Mana Control, Staff Mastery, and Enchantments, the warlock has 3 subclass-specific disciplines:

Allows for the manipulating of different material forces to cause physical damage.

Allows for the manipulation of the forces and states of death.

Allows for the manipulating of the three elemental forces.

Techniques and special abilities that allow leading your allies into battle
Retrieved from "https://regnum.fandom.com/wiki/Warlock?oldid=44000"
Community content is available under CC-BY-SA unless otherwise noted.