The user interface in Regnum Online follows the conventions of other MMORPGs. Here is a labeled image of the HUD, with each part explained below. 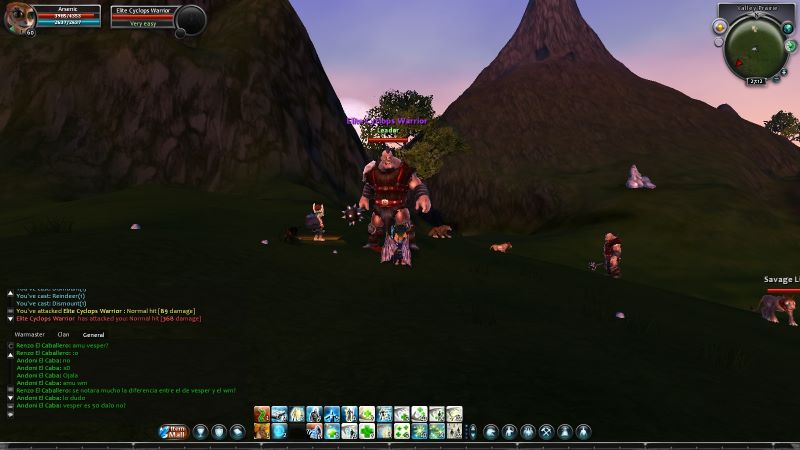 In the top left of the screen is the is the character's name, level, health and mana bars. Underneath these are icons for any constant, activable or aura powers currently affecting the player. Where appropriate, the icon has a small green bar at the bottom to show the time remaining for the effect.

This appears when any player, npc or creature is selected. It shows the name, health value, and challenge of the object. The dot in the top left shows green for allies and red for enemies.

This window logs combat information such as attacks or damage received or other powers cast. It also details the rewards given after defeating an enemy, and shows other status messages like when quest tasks are completed, when forts are attacked, or when friends go online/offline.

The upper right corner of the screen shows the compass as well as three smaller icons. The compass needle shows the direction the character is facing. Hovering the mouse over the compass will show the area the player is currently in, as well as their X and Z coordinates. The origin of these coordinates it the North-West corner of the world map, with X measuring distance East and Z measuring distance South.

To the upper-left of the compass is an icon showing the current time of day in-game. Hovering over this icon will also show the player how long they have been logged in.

In the upper-right is a button to open the Map (also opened by pressing 'm'). This button will also flash when a war banner is placed.

Finally to the lower right is the realm status indicator. This is important with invasions.

Contains the four basic chat rooms a player can have, plus any number of player chats active. All chat windows are realm restricted. Warmaster Chat: A rank gained through vigorous and dedicated play, allowing those who have also gained this status to better communicate in any area of the map.

As you gain higher levels and more learned skills, you will find use in going through Menu> Settings> Show Second Bar, which allows you to put another quickbar to quickly cast more.

The shortcut bar allows quick access to actions, powers, weapons and other equipment, and some consumable items. There are 4 bars, each with 10 slots, though and only one bar can be viewed at a time. All a player needs to do is to drag the icon of the desired item from its inventory, power book or actions window, and release it on one of the bar buttons. Any of these items can be added any number of times, but cooldowns are the same and are shared between buttons of the same power.

By clicking on the arrows to the right-hand side, or using the mouse wheel over the bar itself, the player can rotate through the 4 bars. They can also use the keys F1-F4 to go to each bar directly. Numbers on the keyboard from 1-0 activate buttons 1-10 on the active bar.

In the bottom right of the screen are seven buttons for other windows.

The power book contains all the powers currently available to the player. They can either be cast from here, or dragged onto the shortcut bar for easy access.

Shows the character window, that displays the character's name, level, class, race, experience points and Regnum Points, as well as other character attributes.

View the array of pockets in which you will store a variety of items.

Displays the list of non-combat actions the character can perform. These can also be dragged from here onto the shortcut bar.

Displays the list of quests the player is currently undertaking.

Allows the player to purchase Premium Content items through the spending of Ximerin, bought with real world cash.

These other windows also make up the user interface: 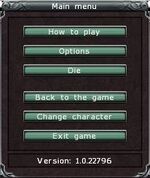 The game's main menu is only available by pressing esc. It contains six options:

For the last two options, Change character and Exit game, the player will lose all positive spells on them and an 18 second timer will count down before the action is completed. The player can then cancel this action up until the last 5 seconds. If the player is attacked during this period (either by enemy player or by a creature) the timer will reset to 19 seconds. This is to stop players logging out mid-fight.

How to play window (Shortcut: h)Edit

This is the game's on-line help. It contains several pages, covering various aspects of the game.

This shows the player's position on the World Map.

Retrieved from "https://regnum.fandom.com/wiki/User_Interface?oldid=44938"
Community content is available under CC-BY-SA unless otherwise noted.