The oldest elves rested in peace at the "Lake of the Ancients" until the invading arrival of the igneos. With help from the humans, the inhabitants of the woods defended their land upon victory, getting the books of dark magic that the igneos practiced. Many of the elves wanted the magic of destruction out of their territory forever, even if that meant expelling and preventing the return of some of their own brothers until today.

The forest realm of Syrtis lies in the south-west corner of the world. Hills, woods, and ancient ruins make up most of the realm. It is inhabited by the wood elves, alturians, half elves and lamai. The people of Syrtis are known as Syrtians. 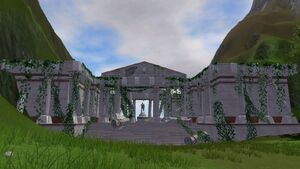 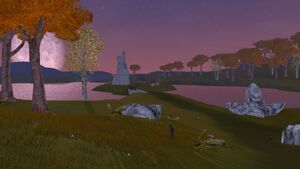 Syrtis is the oldest of the three realms, its history stretching back long before the great war, when people had lived in peace and harmony. The peace did not last long however, an igneo threat emerged from the unknown, and soon changed the lives of the Syrtian people. When the igneos were eventually defeated, their artifacts, and books on the practice of dark magic were found. Some of the elves wished to use this dark magic to their advantage and destroy any future threat, but Lemoral, an ancient prophet, had a vision of the consequences that would ensue should the elves take up the dark magic. Chaos erupted, and the elves began fighting amongst themselves over whether to use the igneo knowledge or seal it away. In the end, those that chose not to use the magic had won, yet at a great cost. The necromancers were banished from Syrtis, and many believed that they would never be seen again. Years later, they returned, now as enemies changed in appearance and belief. The creation of Ignis lead to the Elven War, where the Igneans fought against their old Syrtian brothers for control. The elves allied themselves with the alturian human tribe, and as a result, the Syrtian Republic was established. Due to this new alliance, a new race was brought into the world, the offspring of alturians and elves, half elves.

Unlike the Igneans and Alsirians, Syrtians do not seek the conquest of territories and resources, instead they focus primarily on the defense of their homeland, which is one of the major differences between Syrtis and the other realms. Occasionally however, the elves will launch more offensive war campaigns to counter attack the enemy, mostly with the intention to stall and paralyze them.

Retrieved from "https://regnum.fandom.com/wiki/Syrtis?oldid=44754"
Community content is available under CC-BY-SA unless otherwise noted.