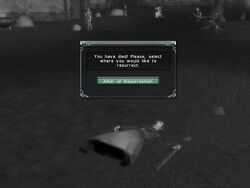 While fighting a creature or another player, a character's HP may go down to 0, causing him to die. The character will fall to the floor on his back, and won't be able to move or talk. Others can still click the corpse, but won't be able to attack it or use skills on it. A exception to this are the conjurer's resurrect, the warlock's cremation and the hunter's camouflage corpse.

If there are no nearby conjurers, the player will have to use the respawn button that appears after death. He will respawn at the last altar he saved to, with full health and mana, but with the condition Resurrection Dizziness and the penalty of Necrostacy.

A player can commit suicide by opeing the game menu (by pressing esc) and choosing the option: Die. A countdown of 90 seconds will start and the action can be cancelled until 10 seconds before death. The player will be taken back to his last altar, but will have a high penalty of 5% necrostacy added. The reasons for suicide might be to travel to another part of the map more quickly, or because the player is stuck in part of the scenery and can't move (very rare but can happen). 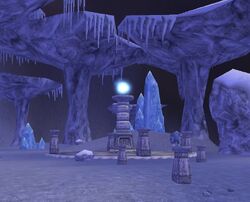 Altars are big stone carved pillars, placed strategically around the realm. They are save points where players spawn after dying. There are a total of 10 in each realm: 1 in each city or town (total 6), 1 more in the inner realm, and 1 in the war zone. Altars belong to the realm they are built in, and will only work for that realm's players. Enemy characters cannot use or attack them (but they can still attack the players around them).

To change the altar a player is bound to, he must find another one and double click it.

Resurrection Dizziness is a condition that prevents the player from being attacked. It lasts for 2 minutes after death, unless it is cancelled, by the player taking any of the following actions: attacking an enemy, casting any power, or getting too close to a fort or castle.

Max level Resurrect (5) will give the character resurrection dizziness, just like if he just respawned in an altar, among other buffs. 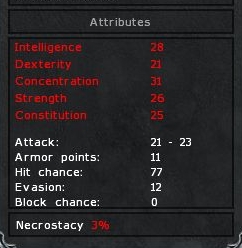 Deaths by a creature or by suicide will give a temporary condition called necrostacy (or necro), which reduces all the player's stats by certain percentage and can be seen in the character window.

Necrostacy is cumulative, ie: if a player already has necrostacy and dies again, more necrostacy will be added to his previous amount. The Necrostacy limit is equal to the player's level, until the player reaches level 11. Level 11+ players will have a limit of 10% necrostacy.

If a player is killed by a monster, he gains 2% Necrostacy. Death by suicide or drowning gives 5% Necrostacy. Being killed by players from other realms, or by allies in the coliseum, doesn't give any necrostacy.

Necrostacy is removed by killing monsters. The more challenging the monsters are, the faster Necrostacy will be removed.

Retrieved from "https://regnum.fandom.com/wiki/Player_Death?oldid=44006"
Community content is available under CC-BY-SA unless otherwise noted.