The victory of the elves against the igneos was not a happy one. Many elves, even with help from the humans, had died at such destructive magic. For all this, some of them thought that in the future, it would be good to use the dark magic for the preservation of their beliefs. What they did not imagine is that they would be forced to use it against their peers. The now darkened elves, with support from the moloks, will not rest until they recover their former life, now a miserable stay in arid deserts.

The barren desert-realm of Ignis lies in the north-east corner of the world. The realm is filled with volcanoes, harsh mountains and endless seas of sand. Its inhabitants include the dark elves, esquelios, moloks and lamai. The people of Ignis are referred to as Igneans or Ignites. 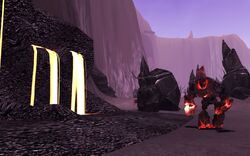 Around 500 years ago, elven exiles banished from Syrtis embarked on a spiritual journey into the unknown, these were the first Igneans. The exiles led by Allahed pressed north-east into the mountains and desolate terrain of the igneos, where they carved their history in stone. The exiles spent many months wandering through the harsh desert climate, surviving on the meat of their fallen. Upon founding the capital city and erecting the great temple of Nakratis, the exiles began to move towards the final stages of their divine design. They were determined to separate themselves from their brothers forever, and so in what would come to be known as the Great Ritual, the exiles under leadership of Priestess Azzaria unleashed a massive sacrifice of eight hundred and eighty-eight souls. It was this obscure ritual that darkened the skin of the elves. Once the Ignean foothold was well established, they allied themselves with the native moloks and established the city of Altaruk. Due to their broad knowledge of magic, the Ignean military has many powerful mages. 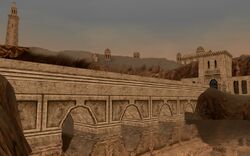 Ignean culture can be traced back to the times of the Igneo War in Syrtis. The Igneos had brought with them powerful books and scrolls containing dark secrets of magic. Upon their defeat, the igneo race was shattered and broken, their defeat caused the cultural backwardness seen in modern igneos today. Their knowledge and many other artifacts fell into the hands of the victorious elves, and naturally a conflict soon ensued over what was to be done with them. The ancestors of the Igneans wanted to embrace the magic, to use the Igneos greatest weapon against them and to strengthen themselves from future attacks. When the study of these magics was forbidden, the Ignean ancestors who refused to give up their analysis were banished. 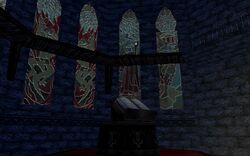 Ignis itself is a matriarchy, the current leader of the Ignean people is High Priestess Rashi Nuri, descendant of Priestess Azzaria. She is seated in the temple of Nakratis, in Ignis' capital of Korr-Tabhar. Igneans have always been a very spiritual people, they live life according to their sacred book, the Tal Nuzzur. Among it's teachings, the Tal Nuzzur says that the gods challenge mortals with vicious and hostile creatures to shape their destinies. It also says that these gods have a split existence between the material and divine planes. The stronger they are in one plane, results in weakness in the other. This is why Igneans regularly sacrifice animals and insects, as they believe it makes the gods more powerful in the spiritual plane. Known gods are the beetle god Tirriket, the panther goddess Sheaneth, the snake god Reptieth, and the hyena goddess Januamar.

Igneans are mainly driven by a strong lust for revenge toward the Syrtians, those who banished them centuries ago and forced them into exile. Because of their long journey, the Igneans have learned the art of war and now embrace it with passion. As far as the conflict with Alsius goes, the Igneans believe that the dwarves dragged themselves into an elven conflict that they had no place in whatsoever, so the Igneans watch carefully not to let down their guard, otherwise the Alsirians could take advantage of the situation.

Retrieved from "https://regnum.fandom.com/wiki/Ignis?oldid=44753"
Community content is available under CC-BY-SA unless otherwise noted.