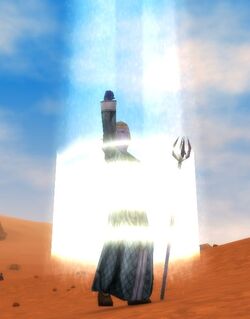 Like most RPGs, characters in Regnum Online grow stronger by gaining experience points (XP) and leveling up. As well as increasing the character's base stats, raising level will give discipline points and/or power points. It also unlocks new armor, weapons, rings and amulets for the character to equip.

Also, the moment a character levels up, he will regain all his health and mana. In very particular ocassions, a player very close to raise a level might kill a weak mob quickly in order to heal himself, surprising and possibly defeating his enemy.

At level 10 characters can choose one of the two subclasses of their main class. Around level 30 they are encouraged to start visiting the war zone.

XP can be gained in three ways: by killing creatures, killing other players and by completing quests. However for most levels, the amount of XP gained by quests will not be enough for the character to level up. Therefore they will have to kill creatures to gain the needed XP. This is known in RPGs as grinding, due to its somewhat tedious nature.

Regnum Online has a very interesting mechanic regarding group leveling. This includes everything from defined groups to just random teaming up in leveling areas. Just by participating 10% in the fight, either by damage, healing, buffing, debuffing and so on, a player counts as "helping" and the gained XP splits up. The advantage of this is that also both players get a group-bonus. This leads to players getting to know each other since teaming up is the fastest way of leveling. The maximum possible case is the Leveling Mob/Mass (Bola de Leveo in spanish). Players with numbers up to 10 just overrun an area and basically kill any creature at hand. The combination of areas, auras, healing, mana distribution, normal hits and power, create a destructive force that doesn't need to rest at all while killing everything in their way almost without stopping. Also, big groups can handle leader mobs easily and obtain rare loot faster, though currently killing leader mobs is not giving group bonuses nor split XP.

Once a character gains the required XP, they will level up. The discipline and power points awarded at each level can be found here. The XP required for each level is as follows:

In general, players will find that rising to Level 10 is very fast and may take an hour or less. Within the first day or so of grinding about 8 hours, attaining Level 30 is not impossible. However, rising from Level 30 to 40 may take another day and from Level 40 to 50 a few days. Beyond level 50, the grinding exponentially becomes much more slower, and at 8 hours a day, you may take at least a week or more of solid grinding to reach Level 60. However, it is generally recognised that you can make a positive contribution to the war effort after around Level 45, and that a Level 50 player still has a meaningful chance of defeating a Level 60 player where the higher level player makes a mistake during combat. It is this very high degree of influence of skill in choosing how to conduct combat in determining the outcome of an encounter, regardless of difference in opponent level, which may be said to distinguish this game from other PvP mmos. 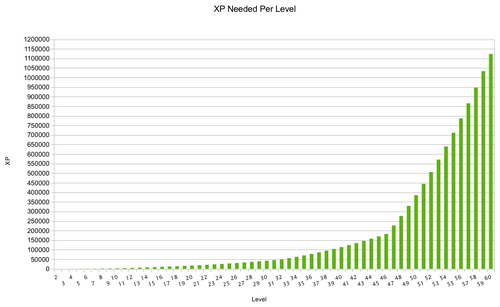 The maximum level is 60, and achieving this level is usually known as graduating. Players often like to invite their friends to their "graduation", and some make a very special event of it. However the game currently doesn't offer anything special for this: the level-up animation is the same as for all levels.

Retrieved from "https://regnum.fandom.com/wiki/Experience_and_Levels?oldid=44958"
Community content is available under CC-BY-SA unless otherwise noted.