The integration of humans to the elven society could be seen again when some of them joined the dark elves' movement in favor of practicing black magic. Unlike their elven peers, humans preserved their physical features but, maybe trying to set themselves apart from their opposition, they decided to adopt the name of esquelings. 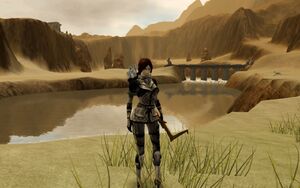 Esquelios, also known as skelics, are one of the 3 human races. They fight under the Ignean banner, along with the exiled dark elves and the native moloks. Unlike the exiled elves, whose skin color changed due to a necromantic ritual, the esquelios chose to keep their natural physical appearance. Instead, they changed significantly by adapting to the harsh environment of Ignis. Esquelios have high intelligence and constitution attributes, making them ideal for defensive classes like the knight or conjurer. Like all humans, they are adept in every form of combat, thus they can chose to play any desired class.

Starting stats for the different classes Esquelios can play as are as follows:

Retrieved from "https://regnum.fandom.com/wiki/Esquelios?oldid=39093"
Community content is available under CC-BY-SA unless otherwise noted.