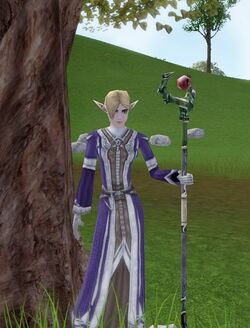 Conjurers are a subclass of the mage. Although their standard role is as a healer and supporter in the backlines, taking one lightly is a huge mistake. Like all mages, conjurers lack defense, evasion, and health, but they have a large selection of crowd control powers to help overcome these weaknesses. A skilled conjurer can play with his opponent, dizzying and knocking them down as he pleases. In addition to crowd control, the conjurer also has access to many damage reduction powers, healing magic, and the ability to summon a creature or spirit to aid him in battle. Conjurers commanding ghosts, golems, liches, and demons are a common sight in the realms of Regnum.

The lack of offensive powers prevent the conjurer from dealing the heavy damage of a warlock, but their increased endurance with controlling allows them to be unparalleled one on one fighters. Although capable of being offensive, a well played conjurer can be even more dangerous as a supporter. Correct distribution of health, mana, power buffs, and defensive auras can help an outnumbered group become victorious. This ability makes the conjurer a high priority target, and blind charges against them should be expected, prepared for, and countered.

As well as the mage disciplines of Mental, Mana Control, Staff Mastery, and Enchantments, the conjurer has 3 subclass-specific disciplines:

Allows the healing and regenerating of wounds, as well as bringing the dead back to life.

Allows the summoning of different types of creatures and spirits to fight for the caster.

Allows the use of magical energies for providing different forms of protection.

Techniques and special abilities that allow leading your allies into battle
Retrieved from "https://regnum.fandom.com/wiki/Conjurer?oldid=44096"
Community content is available under CC-BY-SA unless otherwise noted.