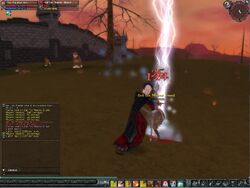 Combat in the game involves fighting with a creatures, enemy realm players in the War Zone, or realm allies in the coliseum.

Not being the focus of the game, PvE (player verses environment) combat is generally fairly simple. Normal creatures have a limited AI, but they will help new players to learn their powers and the mechanics of combat.

However there are also some bosses in the game: the toughest being each realm's dragon and the "superbosses", Thorkul, Daen Rha and Evendim. These require strategy and coordination between many players to defeat. 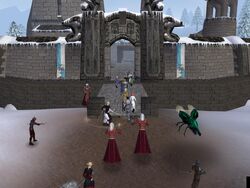 PvP means player vs player. This is when two or more human players face each other. There are different forms of PvP in Regnum Online:

Combat involves making a series of normal attacks or casting powers against an enemy player or creature. Combat mechanics include casting time of powers, footwork, timing, the surrounding environment and character positioning, and although there is no manual targetting in the game, there can still be an element of "dancing", similar to FPS games. Jumping does not dodge attacks, but it can enable a character to more quickly negotiate low obstacles to get away from his or her opponent.

To attack an enemy a player must be in combat mode. A player enters or leaves combat mode by clicking the "On Garde" button, or by pressing ctrl. They can also enter combat mode automatically if they have an enemy selected, by either clicking on them a second time or casting an offensive skill. All skills (even defensive skills, ie buffs) will also put the character in combat mode. If a character is not in combat mode, they won't auto-attack the opponent, even if they are being attacked.

Attacking a target involves two things: normal hits with a character's weapon, and the use of powers.

Normal hits occur automatically, when the target is within weapon range, the attacking character is in combat mode, and facing the target. Also, the target must not be under any kind of "Invulnerable to attacks" effect. The frequency at which normal hits occur are determined by a character's attack speed, and they inflict damage according to their attack damage.

Normal hits can be evaded, or blocked by warriors with shields. These are random occurrences, influenced by Hit chance for evades and block chance for blocks.

If the hit lands, the damage will be reduced according to the target's armor points and any protection or other reductions by powers.

At any time (except while under some effects), the player can cast a power. In order to use a power on a target, just like normal hits, the attacker needs to be facing the target, and the target needs to be within power's range rather than the weapon range. If that is true, the power will begin casting. If the power is instant it will be cast immediately, but if it has a casting time, the character will begin casting the power, during which time they cannot move and are vulnerable to attack. If the player does move during casting, the cast will be canceled. For the power to be successfully cast, the casting must not be interrupted, and at the end of the casting time the target must still be within range and under no kind of invulnerability effect. Otherwise, the power will be wasted: the cooldown will be triggered and the mana spent. For more information, see power cancellation.

Even when successfully cast however, just like normal hits the power can be evaded or blocked, as well as resisted by the target.

Combat can end with the death of one of the participants, both of them (unusual but possible), or none of them, if a player successfully manages to escape. Defeating a creature will give experience (as long as it's not too low a level) and gold and/or items. Defeating a realm enemy will award both Regnum Points and experience, dependant on the level difference between the players. Defeating an ally in the coliseum doesn't give any prize.

It is generally the case that killing an enemy player, or meaningfully contributing to such a kill, awards a quantity of experience far in excess of killing a monster. It is in fact, possible to level up by just participating in the War Zone and killing enemy players. However, you may encounter enemy players maybe 30% of the time in the War Zone, and you can continue to grind on monsters in the meantime, to keep a good grinding speed.

During xp boost events, which the developer regularly activates, the quantity of experience given for a kill of an enemy player is colossal.

Retrieved from "https://regnum.fandom.com/wiki/Combat?oldid=44962"
Community content is available under CC-BY-SA unless otherwise noted.