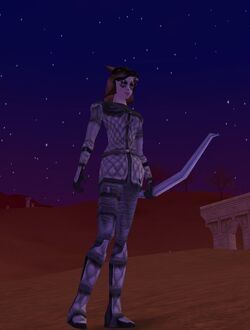 "He who strikes first won't have to strike again - If he strikes hard enough." - Game Description

The archer class focuses on ranged combat using short and long bows. Archers are quicker than any other class and have higher evasion rate. The main attribute of the archer is dexterity, giving higher bow damage, spell focus and evasion rate. Archers, not having a specific secondary attribute, may choose a balance between concentration, intelligence and constitution.

The 4 disciplines of archer powers are:

Ruses and techniques for getting combat advantage.

Movements and techniques for avoiding being hit in combat.

Subclasses for Archers are the Marksman (Offensive) and the Hunter (Tactic). Marksmen have the ability to make precise shots that have temporarily increased statistics as well as deal high damage from a long range while maintaining a decent defense. The only problem is they have to deal with a relatively small mana pool, considering the cost of their skills. Hunters are able to detect realm enemies, camouflage themselves and their allies, which allow them to create ambushes and kill priority targets. Their offensive powers are very limited,but if wisely used can make of the hunter a very effective assassin. They also can tame wild creatures to aid them in the combat.

Retrieved from "https://regnum.fandom.com/wiki/Archer?oldid=44816"
Community content is available under CC-BY-SA unless otherwise noted.